In the last decade, the commodity futures market has assumed increased dominance in the finance industry. GAM Investments’ Dr Daniele Lamponi and Dr Lars Jaeger explore how alternative risk premia algorithms can adapt to the financialisation of commodity markets.

Although commodities have been part of certain investors’ portfolios (eg hedge funds) for a long time, it was only in the early 2000 that they emerged as a more broadly accepted asset class. The move was supported by academic studies, such as Gorton [2006] and Erb [2006], pointing out their financial benefits (inflation hedge, alternative source of returns or risk premia), and diversification benefits (low correlation with equity and bond markets). The rising interest in this new asset class was accompanied by the creation of electronic matching platforms, resulting in an expanded market access and lower transaction costs. This finally led to the growing importance of non-traditional participants, such as institutional investors, index investments, exchange traded funds, or ARP strategies.

The expected outcome is an increasing dominance of the finance industry and an expanding role of financial motives in the commodity futures market [Domanski 2007], also referred to as “financialisation of the commodity markets”. The inflow of capital is expected to have already somewhat changed, at least partially, the behavior of the asset class, and will likely do so in more extreme ways in the future. For instance, some studies have reported spillover effects from financial markets to commodity futures, resulting in an increase in volatility and co-movements with the equity market. For example, both Silvennoinen [2010] and Adams [2015] analyse risk spillovers from stocks to commodity volatility and correlation, while Lombardi [2013] reviews the impact of these effects on portfolio allocation decisions. On the other hand, beneficial effects, such as higher liquidity and thus possibly less trading costs, have also been reported. For example, among others, Irwin [2013] and Brunetti [2011] suggest that the financialisation mitigates the hedging pressure and improves risk sharing, finally lowering the cost for hedgers. While there is no consensus on the positive or negative impact of this evolution, however, there is some support for the idea that following a growing interest from market participants, the behavior of commodity futures has changed.

The main empirical studies supporting the hypothesis of financialisation are based on the analysis of the term structure of commodity futures, on the correlation between commodities and other asset classes, and on the analysis of aggregated Commitments of Traders (COT) of the Commodity Futures Trading Commission (CFTC data). The COT report is a weekly publication that shows the aggregate holdings of different participants in the US futures market, split into long, short and spread positions. CFTC data therefore provide a snapshot breakdown of the commitment of the classified trading groups, allowing one to disentangle hedger and speculators positions.

All these empirical analyses support the hypothesis of a structural change in commodity future markets, although other interpretations might also be available. For example, co-movements with other asset classes might be attributed to risk on/risk off environment. Also, CFTC data, although widely used in literature, are subject to criticism as the classification of the market participants is based on the best knowledge of CFTC. Also, a market participant might act in multiple ways while the CFTC classification operates on a binary logic.

While not iron clad in the data, the existence of structural changes in commodity markets is supported by both rational expectations and empirical evidence. However, research is still ongoing.

a. The figure shows the ratio of hedger net positions versus open interest (average over rolling one year window). 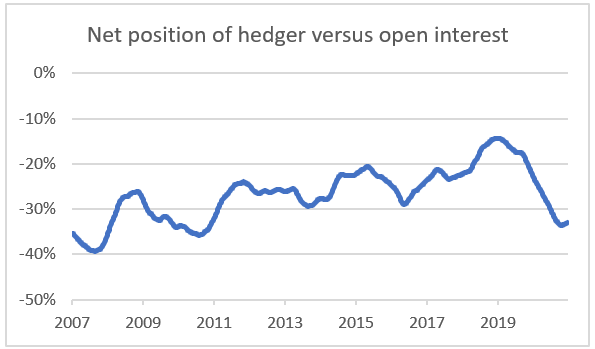 b. The figure shows the ratio of spread positions versus open interest (average over rolling one year window). 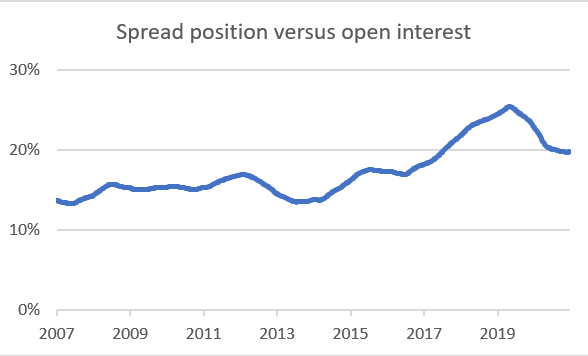 Source GAM, CFTC as of November 2021. For illustrative purposes only.

It has been well documented decades ago (as early as 1930 by John Maynard Keynes) that the predominant commercial hedger activity in agricultural future markets results in a risk premium being paid out and collected by which act de facto as insurers. ARP strategies are among the actors collecting the premia paid by commercial hedgers and are a relatively new2 player in the space: harvesting algorithms commonly used in ARP strategies, such as commodity trend following and commodity carry trade, have the tendency to align with speculators and take opposite positions to hedgers [Jaeger 2008, 2012]. Trend following is a long-time established investment strategy relying on the persistence of price movements (going back to the 1970s in the form of CTAs). In the commodity markets, the strategy has been shown to exploit hedging pressure for natural hedgers [Basu 2013, Moskowitz 2012]. Carry in the commodity markets is also a very established strategy and exploits the term structure of commodity futures. It relies on the normal backwardation theory of Keynes [Keynes 1930], the hedging pressure theory [Hirshleifer 1988] and the theory of storage [Kaldor 1939, Working 1949, Brennan 1958]. By their very nature both strategies might be impacted by changing balances between speculators and hedgers.

As a pioneer in the ARP space with an almost two-decade long track record, GAM Systematic is in an almost beneficially good position to assess the evolution of harvesting algorithms from a practitioner perspective, in our view. For that purpose, we build simple basic strategies harvesting momentum and carry trade in the soft commodity market.

Data stem from Bloomberg and span the period 2006-2021. For all securities we use continuous future prices, which create long-term time series of prices. Futures markets in fact are comprised of individual contracts, each with a pre-determined lifespan: at any stage, there are one or more contracts, or "delivery months", that have expiry dates stretching out into the future, and expiring contracts are replaced by newly listed ones. Thus, we are dealing with an overlapping set of time series rather than a continuous stream. The form of the latter can, however, be generated artificially and various approaches exist for this. Here, for example, we use a standard ratio adjustment3. Moreover, while practitioners often use custom rolling schedule and methodologies, here we simply roll to the new contract based on volumes. As signal, we use a simple 12-month return indicator for the trend following strategies, while the carry strategy is systematically long the third contract and short the nearest. We use equal risk allocation methodologies to compute contract allocation. Our historical analysis is in line with our live experience which goes back over this time and shows that both strategies have delivered excess returns over the considered period4, as shown in Exhibit 2, with Sharpe ratios between 0.30 and 0.50. In real world application, enhanced signals and/or contract allocation methodologies further help improve these values. However, to avoid any in sample bias risk we use here the simplest possible signals and allocation methodology, as they would have been designed 20 years ago by young and inexperienced ARP players (as we were at the time). 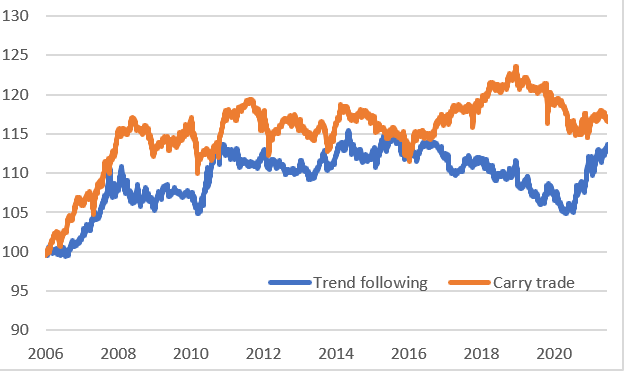 Source: GAM as of November 2021. For illustrative purposes only.

The main question is the implication for the investment community: how harvesting algorithms such as trend following and carry in soft commodity markets are impacted by the financialisation?

As anticipated, and as widely done in academic literature, we use as proxies for the financialisation the data reported by the CFTC. In doing so we are fully aware of all criticisms on the dataset, particularly of the approximative classification used by CFTC. While data are forcibly very noisy, it is our belief that the dataset provides highly useful information about the market structure of commodity future traders. As proxies for the financialisation we use, for example, hedgers’ net positions over open interest and spread positions over open interest. Regression analysis shows that both strategies are negatively affected by the financialisation. The regressions are performed using returns over three-month period as dependent variable and averaged CFTC data over three months as independent variable. Exhibit 3 reports the scatter plots of strategy returns versus hedgers’ net position ratios with regression lines for both the trend following (Exhibit 3a) and carry (Exhibit 3b) strategies. With t-statistics of 4.62 and 2.75, both regression lines are negative and statistically significant5: a decrease in hedgers’ net short position is historically associated with a decrease in strategy returns. The financialisation phenomenon is impacting risk premia harvesting algorithm expected returns: as more players chase the same returns, premia levels decrease. However, from the theoretical point of view, in equilibrium, they remain positive; interestingly harvesting algorithms could possibly even benefit from this change in investors’ balance while embracing new arising opportunities in an evolutionary framework. This is the focus of our ongoing research, aiming at exploiting the information content of crowding effects, to improve risk adjusted performances of both trend following and carry harvesting algorithms. 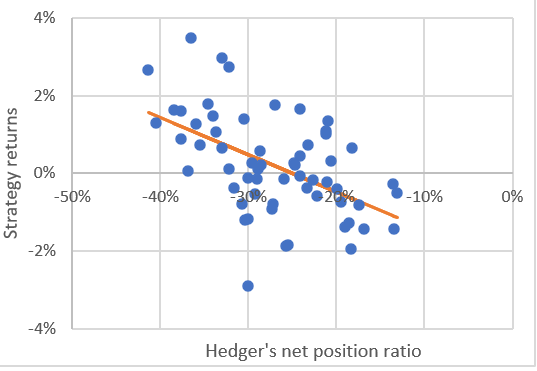 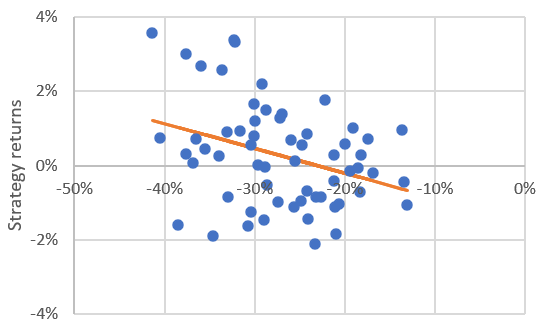 Source: GAM, CFTC as of September 2021. For illustrative purposes only.

As discussed, both empirical evidence and rational expectations point to crowding effects in the commodity markets with new dynamics and balances between hedgers and speculators emerging. The increase in liquidity due to the financialisation of commodity markets might lead to a decrease in expected returns from basic harvesting algorithms. Investors, however, may continue to benefit from diversified ARP programs harvesting risk premia in the commodity markets and even benefit from new opportunities arising, as for instance in the aftermath of the Covid-19 crisis; a decrease in allocation from financial players and the reduction of speculators’ activity has led to large risk premia being available to patient investors, as were captured by ARP algorithms as well as CTAs.

1 The term “soft commodities” refers to commodities that are grown, rather than mined. In our case we consider coffee, cocoa, sugar, corn, wheat, soybean, cotton, and livestock, such as lean hogs and feeder cattle.
2Our strategies date back to 2004 but that is significantly long. Most ARP offerings started around 2016.
3 In the backwards ratio method, the prices are multiplied by a fixed constant (ratio) to eliminate jumps. The ratio is computed by dividing the front month price by the expiration month price. Then the ratio is multiplied by the entire historical prices. The returns of holding a contract and rolling over are therefore conserved. However, the time series does not reflect the real absolute value and each rolling date requires recalculation of the entire history.
4 Although with all the caveats of the simplistic approach used, these basic backtests match our live experience with the two strategies.
5T-statistics can be thought of as a measure of the precision with which the regression coefficient is measured. A t-value larger than 2 implies statistical significance.

Important legal information
The information in this document is given for information purposes only and does not qualify as investment advice. Opinions and assessments contained in this document may change and reflect the point of view of GAM in the current economic environment. No liability shall be accepted for the accuracy and completeness of the information. There is no guarantee that forecasts will be achieved. The mentioned financial instruments are provided for illustrative purposes only and shall not be considered as a direct offering, investment recommendation or investment advice. Assets and allocations are subject to change. Past performance is no indicator for the current or future development.

Quants and Quandaries: The most asked questions about systematic investing

The Evolution of ESG Assets – a Systematic Trader’s Perspective

Efficient Portfolio Allocation in a Time of Slowing Growth