David Jacob, Group CEO, said: “While the investment performance over a three- and five-year period has improved, first quarter net flows continued to be impacted by ARBF-related matters. Having now sold all but the final group of material assets and with an agreement in place which leads to the sale of them as well, we look forward to putting this difficult period behind us. Our priority during the liquidation process has been to maximise liquidity and value for clients, while ensuring fair treatment for all. I would like to thank our clients for their patience, as we continue to work hard to return their assets. Our full focus remains on rebuilding GAM as a leading active asset manager, known for its differentiated product offering and strengthening the company for our shareholders.”

Investment management AuM decreased to CHF 55.1 billion1, from CHF 56.1 billion2 as at 31 December 2018. This was driven by net outflows of CHF 4.0 billion3 across capabilities, only partially offset by positive market and foreign exchange movements of CHF 3.0 billion. 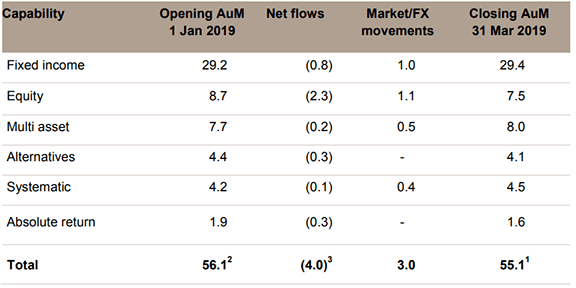 Alternatives saw net outflows of CHF 0.3 billion, mainly driven by outflows from the GAM Physical Gold and GAM Commodity funds which were partly offset by inflows into an existing Swiss institutional mandate.

In private labelling, AuM increased to CHF 82.3 billion, up from CHF 76.1 billion as at 31 December 2018. This was driven by net inflows of CHF 1.9 billion from existing clients and positive market and foreign exchange movements of CHF 4.3 billion.

GAM continues to make good progress on the liquidation of the ARBF assets. Following the recent sale of two material assets, a further distribution will take place over the next two weeks resulting in 89–95% 4 of the Luxembourg-regulated GAM Multibond and the Ireland-regulated GAM Star funds, and 80–84% 4 of the Cayman master fund’s and the associated Cayman and Australian feeder funds’ assets being returned to clients. This leaves one remaining group of material assets within the ARBF funds and mandates, which are subject to the agreement as set out below.

GFG has already refinanced approximately one third of the GFG originated notes previously held in strategies managed by GAM International Management Limited. Under the terms of the agreement, GFG agrees to facilitate the acquisition of the relevant notes at the valuation at which the notes were purchased by the relevant accounts. The closing of the transaction is expected to be completed on or before 15 July 2019 and is subject to customary conditions. The sale of the notes will complete the asset divestitures in connection with the ARBF account liquidations announced in August 2018.

Subject to the successful execution of the above, a final distribution will be made to clients as soon as possible, completing the liquidation with total distributions currently expected to be between 99.6–101.0% of amounts held at the time the liquidation began5, depending on the funds and mandates in question.

With the finalisation of the ARBF liquidation anticipated in coming months, we believe that GAM is well positioned to capture client demand with its differentiated and specialised product offering. We are well on track to achieve the CHF 40 million cost savings by the end of 2019. However, we reiterate our expectation that the financial performance for the first half of 2019 will be materially below the first half of 2018, given the significantly lower investment management AuM and related revenues.

GAM is a leading independent, pure-play asset manager. The company provides active investment solutions and products for institutions, financial intermediaries and private investors. The core investment business is complemented by private labelling services, which include management company and other support services to thirdparty asset managers. GAM employs around 900 people in 14 countries with investment centres in London, Cambridge, Zurich, Hong Kong, New York, Milan and Lugano. The investment managers are supported by an extensive global distribution network.

Headquartered in Zurich, GAM is listed on the SIX Swiss Exchange and is a component of the Swiss Market Index Mid (SMIM) with the symbol ‘GAM’. The Group has AuM of CHF 137.4 billion (USD 138.0 billion) as at 31 March 2019, excluding ARBF-related AuM of CHF 1.35 billion in liquidation.

This press release by GAM Holding AG (‘the Company’) includes forward-looking statements that reflect the Company’s intentions, beliefs or current expectations and projections about the Company’s future results of operations, financial condition, liquidity, performance, prospects, strategies, opportunities and the industry in which it operates. Forward-looking statements involve all matters that are not historical facts. The Company has tried to identify those forward-looking statements by using words such as ‘may’, ‘will’, ‘would’, ‘should’, ‘expect’, ‘intend’, ‘estimate’, ‘anticipate’, ‘project’, ‘believe’, ‘seek’, ‘plan’, ‘predict’, ‘continue’ and similar expressions. Such statements are made on the basis of assumptions and expectations which, although the Company believes them to be reasonable at this time, may prove to be erroneous.

These forward-looking statements are subject to risks, uncertainties, assumptions and other factors that could cause the Company’s actual results of operations, financial condition, liquidity, performance, prospects or opportunities, as well as those of the markets it serves or intends to serve, to differ materially from those expressed in, or suggested by, these forward-looking statements. Important factors that could cause those differences include, but are not limited to: changing business or other market conditions, legislative, fiscal and regulatory developments, general economic conditions, and the Company’s ability to respond to trends in the financial services industry. Additional factors could cause actual results, performance or achievements to differ materially. The Company expressly disclaims any obligation or undertaking to release any update of, or revisions to, any forward-looking statements in this press release and any change in the Company’s expectations or any change in events, conditions or circumstances on which these forward-looking statements are based, except as required by applicable law or regulation.