Amid loud consensus for ever-higher inflation, Julian Howard puts forward the case for cooling. He argues that the key drivers of inflation all have the potential to fade over the next year and, given the unpredictability of inflation, investors should not obsess with mitigating it.

Clinical guidance in medicine often suggests waiting for mild to moderate symptoms to persist before presenting to a doctor. This is for the simple and surprising reason that many conditions in fact resolve themselves in the space of a week or so. But for many investors today, the ‘symptoms’ of inflation have gone on too long, with US headline inflation reaching 8.5% year-on-year in March, and hitting a heady 7% in the UK. This seemingly relentless upwards march in prices is problematic from an investment standpoint for several reasons.

Firstly, inflation – especially when it is accelerating faster than wages – dampens consumer demand as a larger proportion of disposable income is spent on basic necessities such as food, shelter and energy. This leaves less to be spent on other sectors of the economy. A recent survey in the UK revealed consumers have aggressively cut back on TV subscription services, with the number of UK homes that have at least one paid-for subscription streaming service falling by 215,000 in the first quarter of 2022 alone.1 This suggests that corporate financial strength of those sectors reliant on consumers but not providing essential goods or services, might be at risk.

The second mechanism is tighter monetary policy which dampens demand both by slowing down credit creation but also making saving relatively more attractive than spending. Markets expect the Federal Reserve (Fed) to lift US interest rates by around 2.5% in 2022, but some Fed officials have pushed for a more aggressive pathway. Federal Reserve Bank of Saint Louis, President James Bullard, recently said in April that the central bank should not rule out a rate increase of 75 bps at its next monetary policy meeting. This could prove a shock to an economy used to a quasi-permanent low interest rate regime. According to one housing market analyst, approximately 70% of US homeowners enjoy mortgages with rates of less than 4%2, rendering them – and the wider economy – vulnerable to policy tightening. Any such slowdown in the US economy is again likely to hurt the more cyclical parts of the equity market.

The third way in which rates hurt investors is via higher government bond yields. These comprise a growth and inflation element, and the latter has been rising as bond investors price in higher inflation over time. Not only do higher yields hurt existing bondholders as their coupons are outpaced and the value of their bonds correspondingly falls, but it also hurts equity investors because bond yields are used as a benchmark for pricing all financial instruments’ future cash flows. Higher yields render future cashflows less valuable and vice versa. Investors could therefore be forgiven for focusing on inflation, but how they perceive its likely course from here may have significant implications for portfolios. The overwhelming temptation to rotate investments to deal with this specific issue could be risky if inflation ends up being fleeting, and therefore, in our view, the case for a cooling of inflation deserves to be heard at least. 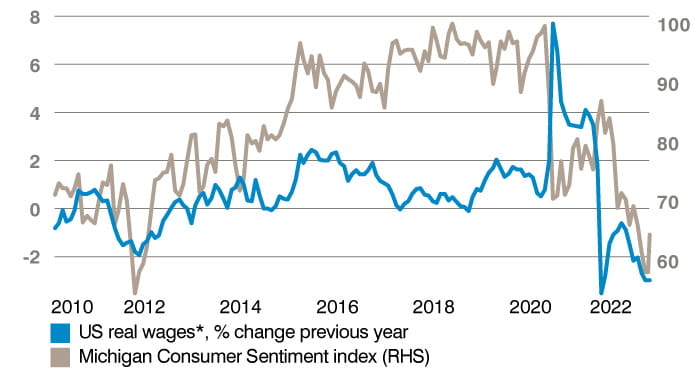 Source: Bloomberg. *US hourly wages less headline CPI. For illustrative purposes only. Past performance is not an indicator of future performance and current or future trends.

The causes of today’s inflation are several-fold, but for each of them we see a potential off-ramp. Take labour shortages resulting from the pandemic response in the US and the UK. In both cases, Federal assistance checks and furlough schemes respectively have now ended. This is gradually forcing workers back into the labour market as savings accrued over the last couple of years start to dry up. The normalising process can be seen in the job additions data, with the latest US payrolls data showing that the US economy in March added 431,000 jobs versus an expected 300,000. As workers continue to join or re-join the labour force, wage pressures should start to ease. Meanwhile a lack of semiconductors has been a key blockage in the production of a wide variety of consumer goods such as motor vehicles, resulting in delays and price rises further contributing to inflation. But the good news is that the industry has always been prone to periods of drought and plenty, with the world’s biggest contract manufacturer of semiconductors Taiwan Semiconductor Manufacturing Company (TSMC) recently announcing a near-USD 44 billion investment in new capacity this year. Intel similarly plans a USD 28 billion investment involving two new factories in Ohio, while Samsung has suggested capital spending of over USD 33 billion. High energy prices have been another driver of inflation but here too there are signs of softening. At the dawn of the Russian invasion of Ukraine, Brent crude futures were priced at USD 97 but after an initial spike fell back to USD 98 on 11 April and by late April still stood at under USD 107. Amid the opening of strategic reserves, and the slow but steady increase in new oil rigs in the US, energy price rises have been relatively well contained in the circumstances in our view, showing that the supply curve can both meet excess demand and mitigate geopolitical risks.

The real question then is when will actual reported inflation data begin to cool? In fact, it may already have done so. The latest US inflation print revealed that the surge which began in 2021 could be starting to peak. Although the previously mentioned headline US CPI figure of 8.5% looks – and feels – uncomfortably high, monthly increases in the core measure (excluding food and energy costs) have begun to stall. March saw just a 0.3% month-on-month rise in this index, representing the slowest pace in six months. And the easing was fairly broad-based. New car price rises slowed as manufacturers started to get the vital semiconductors they needed and this took the pressure off the red-hot used market which was facing severe price distortions. Housing-associated costs also softened. And while airline fares and hotel room prices pushed up, this is surely a temporary function of economic re-opening as US travel restrictions had only quite recently been loosened while Europe began to ease restrictions meaningfully over the last couple of months. Mass cancellations of scheduled commercial flights on both sides of the Atlantic point to the difficulties in suddenly switching travel back on. For example, it takes a full week and around USD 40,000 in labour costs to ready a laid-up Boeing 737 jet for commercial service again. But this is both understandable and temporary. Intriguingly, especially for those who subscribe to the view that inflation expectations feed inflation itself, US consumers’ inflation expectations for three years’ time fell to 3.7% in March, down from 3.8% the previous month.

Not a predetermined pathway - some inflation measures have actually cooled: 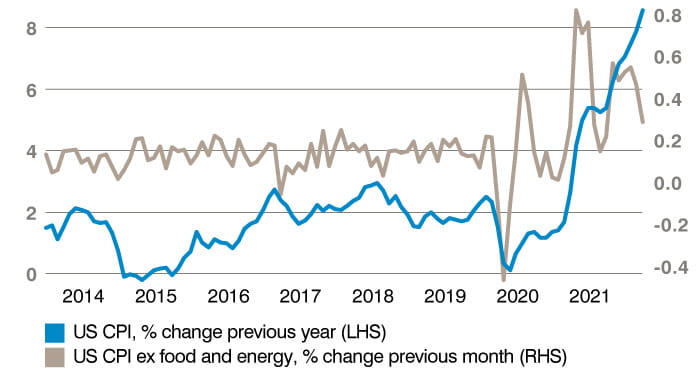 Source: Bureau of Labor Statistics. For illustrative purposes only. Past performance is not an indicator of future performance and current or future trends.

Predicting the future pathway of inflation has always been notoriously difficult, if not impossible. Since it is a lagging indicator, it is presently unknowable which leads economists to use models to try to predict its path – and with varying degrees of success. In the Philadelphia Federal Reserve Bank’s May 2021 survey of 36 private sector forecasters, the median inflation (as measured by the PCE Core gauge) forecast for the year was 2.3%. The group as a whole put a 0.5% chance of inflation exceeding 4% but by the end of 2021, it was 4.9%. The public sector fared little better, with none of the Fed’s 18-member rate-setting Federal Open Market Committee (FOMC) predicting inflation above 2.5% for the year.

This has profound implications for portfolio construction in our view. While there is a legitimate case against the overwhelming consensus of permanently higher inflation, it is arguably the unpredictable nature of inflation itself which should prompt heightened caution before making portfolio changes that assume permanent deviations from the historical path of price rises. Piling into already-expensive inflation-protected bonds or richly valued real assets like commodities and real estate will likely only serve to increase portfolio sensitivity to this notoriously unknowable factor, and create a risky exposure to falling prices.

One potential solution to this is simply to identify assets which enjoy their own fundamental long term investment case but also have the ability to exert pricing power over time anyway. Global equities spring to mind in the first instance, where the intrinsic case today rests on strong earnings yields over risk-free rates, but also on a historical ability to generate real returns over time. Specifically, the asset class has produced a real return of 7% from 1870 to 2015, according to one seminal study3. Investors might consider, therefore, pursuing long term structural narrative themes for their portfolios which may provide incidental inflation protection rather than addressing the issue head-on only to find it has evaporated a year later. The Hippocratic Oath that all medics take sums it up well with its valid exhortation to “First do no harm.”

1 Source: Entertainment on Demand report, 18 April 2022
2Source: The Economist, 9 April 2022
3Source: ‘The Rate of Return On Everything’ by Federal Reserve Bank of San Francisco, December 2017
Important legal information
The information in this document is given for information purposes only and does not qualify as investment advice. Opinions and assessments contained in this document may change and reflect the point of view of GAM in the current economic environment. No liability shall be accepted for the accuracy and completeness of the information. Past performance is not a reliable indicator of future results or current or future trends. The mentioned financial instruments are provided for illustrative purposes only and shall not be considered as a direct offering, investment recommendation or investment advice. The securities listed were selected from the universe of securities covered by the portfolio managers to assist the reader in better understanding the themes presented and are not necessarily held by any portfolio or represent any recommendations by the portfolio managers. There is no guarantee that forecasts will be realised. Indices cannot be purchased directly.

The Disruptive Strategist - Learnings from California